It’s July! Where have the months gone? It only feels like yesterday that it was Christmas and now we are getting right into the heart of summer. Is it just me? or does this year feel like it’s going really fast?. Sorry there wasn’t a Saturday stacking the shelves yesterday, I had work and when I got home we watched the Portugal world cup game as Portugal (were) my sweepstake team. This week was mostly just spent in front of my laptop re-writing my dissertation draft. It’s now down to 10,000 words (after cutting my soul out along with all the side plots I’d loved writing), but due to cutting all the side-plots the ending I had no longer made sense so I had to write a new one. Which turned out to be terrible. I’ll be working on that this week and trying to improve it, but I only have 2,000 words at most to do so. Which used to seem a lot to me, but lately 2,000 words has seemed like nothing. We went to go and see a local amateur dramatics performance of Spamalot this week though which was a lot of fun. I have never seen Monty Python before, but it was definitely my kind of humour and the actors/actresses were fantastic! We’ve also had fantastic weather this week, and I have got a (kind of) tan! Which I am really proud of, as my pale skin rarely ever tans. I hope you all have had a good week too, let me know what you’ve been up to in the comments below.

IN CASE YOU MISSED IT…

BOOKS I FINISHED THIS WEEK… 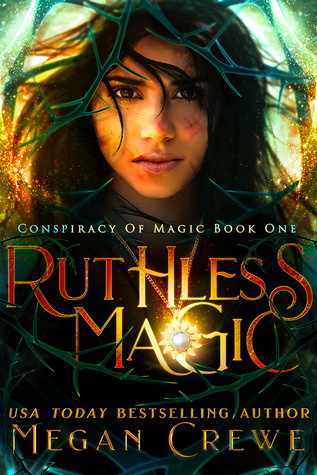 In the contest to keep their magic, the only options may be die… or kill.

Each year, the North American Confederation of Mages assesses every sixteen-year-old novice. Some will be chosen. The rest must undergo a procedure to destroy their magical ability unless they prove themselves in the mysterious and brutal Mages’ Exam.

Disadvantaged by her parents’ low standing, Rocío Lopez has dedicated herself to expanding her considerable talent to earn a place in the Confederation. Their rejection leaves her reeling—and determined to fight to keep her magic.

Long ashamed of his mediocre abilities, Finn Lockwood knows the Confederation accepted him only because of his prominent family. Declaring for the Exam instead means a chance to confirm his true worth.

Thrown into the testing with little preparation, Rocío and Finn find themselves becoming unlikely allies—and possibly more. But the Exam holds secrets more horrifying than either could have imagined. What are the examiners really testing them for? And as the trials become increasingly vicious, how much are they willing to sacrifice to win?

The first in a new series by USA Today bestselling author Megan Crewe, Ruthless Magic combines the magic of Harry Potter with the ferocity of The Hunger Games alongside a poignant romance. Fans of Cassandra Clare and Holly Black, look no further for your next urban fantasy fix!

I hope you have all had a good week, and that you are having a relaxing Sunday.

If you haven’t already, hit the follow button below to get notifications and/or emails every time I post!

This site uses Akismet to reduce spam. Learn how your comment data is processed.

Naturally Beautiful Skin ... At Any Age!

I eat books and breathe stories to survive!

“The world was hers for the reading.”